we are aotearoa embodiment collective

Aotearoa Embodiment Collective.
​A community of wellness practitioners dedicated to reconnecting you with
nature, your self and your body.
Welcome to our shared space.
We invite you to feel at home in the intimate & healing studio space we have created. This is a space for small groups to connect deeply with one another, drop into the body & connect with the inner self.  The space is aimed for community events, professionals with private clients, and budding practitioners who are starting up and want a small, low-commitment venue in which to try their services before finding their feet.

We have memberships prices and one-off booking options.

Meet us!
​
Jooske Honig is a passionate Acroyogi who started her Acro journey in 2011 in Te Anau NZ.  Taught by International Acroyoga instructors Jason and Chelsey Magness, co-founders of Yoga Slackers,  Jooske ‘s love was awakened. Since then she has attended further training with them as well as other Acro teachers in Aotearoa, the US and in her native country of the Netherlands. In the US she attended Acroversity and Divine Play (2017) and recently travelled in combination with visiting family to the Dutch Acrobatic Convention 2018.

In January 2018 Jooske  received her certificate in Acromastermind Teacher Training. Based in Dunedin, she teaches Acroyoga foundations and Intermediate acroyoga training sessions along with private acro coaching. She has offered workshops at festivals such as Circulation, Autumn Arena, Dunedin Fringe, Waitati music fest, Vogel st street party and The Mix New Year’s festivals over the last 4 years.

Her teaching is a combination of different practices and styles of movement that Jooske has worked with over the years. Jooske has been part of creating and performing at events such as 2017 Fragments of a Dream, 2018 Dunedin Fringe Festival The Hands That Bind Us, 2018 The Mullet Festival, 2019 Strork/DANZ at the Dunedin Fringe Festival. Jooske runs a therapeutic clinic from home, In-Spiral, and is part of the Embodiment Collective - a holistic collective where she offers massage and energy work to support people reconnecting with their body, mind and spirit. 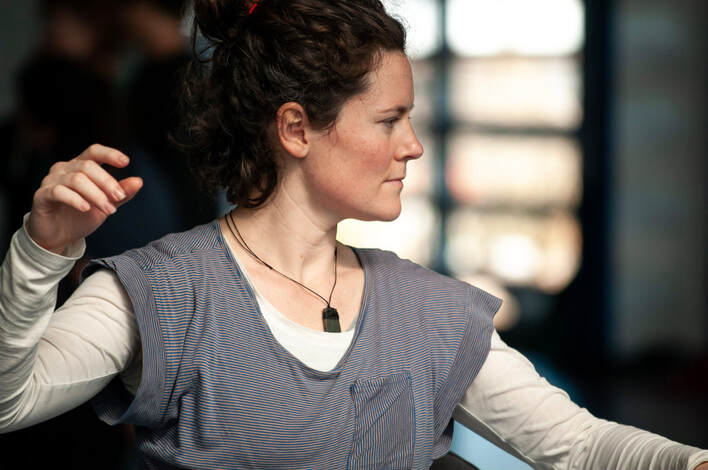 Miriam Marler is an-Aotearoa-based dance artist and body worker who hails from the deep south of Ōtepoti/Dunedin where she facilitates Conscious Movement informed by Contact Improvisation, butoh, Body Weather, Contemporary, and Somatic Practice. With a background in Contemporary Dance (Unitec 2004), she is passionate about how movement improvisation can lead to greater self-awareness and self-knowledge.

In 2019 Miriam held the role of rehearsal director for Hiedi Latsky's On Display Dunedin under the direction of Touch Compass Dance at Dunedin Fringe Festival, and the work was nominated for Best Dance award. In 2018 she held the role of Teaching Fellow for Movement Education in the School of Physical Education, Sport and Exercise Sciences at the University of Otago, teaching first year students theory and practical dance, performance & choreography skills. Miriam choreographed dance film for Tempo Dance Festival Auckland, and live works for the Dunedin Fringe Festival and The Body Festival in Christchurch from 2012-2015.

She holds a Bachellor of Performing and Screen Arts (BPSA) in Contemporary Dance, a Postgraduate Diploma in Creative Industries from Auckland University (Dance Studies), and a Masters of Dance Studies from the University of Otago with distinction.